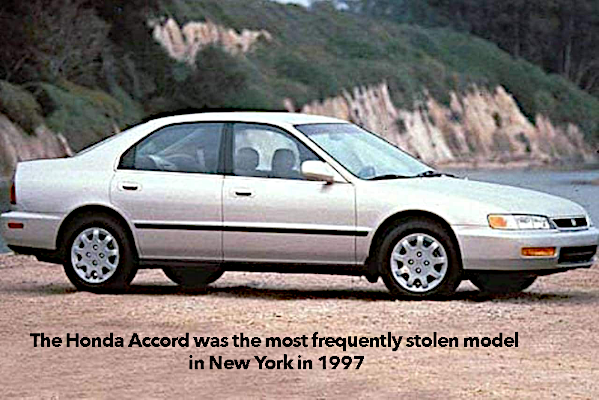 GUNS, DRUGS, CARS–the usual stuff, Mike the policeman said. The three basic food groups of American crime, and cars are the one we all consume. Nearly a million and a half cars are stolen each year. To find out how it goes down, I spent a night riding with Joe and Mike of Newark’s elite TARGET anti-car-theft squad.

In 1989, Newark led the nation in stolen cars; today, it has dropped well behind the new leader, Fresno. Programs like TARGET have cut the numbers to half the 1989 tally. From seven in the evening until three in the morning, Joe and Mike ride–checking plates, looking for suspicious vehicles. Sometimes, they set up stakeouts with bait cars. “It’s like fishing,” police director Joseph J. Santiago tells me. “You want to find out where they’re feeding.”

…Many cars are stolen for the same reason they are bought: for fun and excitement. Here, as in many cities, the cars Mike and Joe chase are stolen for joyriding: They’re stolen to be chased.

…We pass three vacant public-housing towers, windowless, stark against the sky. At their base, light seeps from beneath the tent of a religious-revival meeting. Joe and Mike try to explain how they spot stolen vehicles, but so much of it is instinct, cumulative experience. They look for expensive cars driven by kids, of course, but, like hunters noting the broken twig in the forest, they scan for other, subtler signs: a tiny hole punched in the door to pop the lock, a broken window.

…But, he says, there’s something else that gives thieves away. “They drive like fucking assholes.”

…It’s a quiet night for Joe and Mike, and they’re almost apologetic. The other day, they chased a $100,000 Porsche. Once, a vehicle they were after went out of control, turned over four times, and came to rest upside down against a telephone pole. There was no sign of movement. “Be advised,” Joe radioed, “we have four DOA.” Then they heard glass breaking. Four windows shattered and four young perps emerged, like hatching chicks, brushed themselves off, and vanished at a run.

Is there anything carmakers could do to make it harder to steal their cars? I naively ask. The cops burst into laughter: It’s just SO easy to steal cars.

Read the full article behind a paywall at https://classic.esquire.com/article/1997/11/1/hot-cars