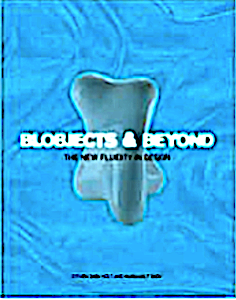 Blobjects and Beyond: The New Fluidity in Design
By Steven Skov Holt and Mara Holt Skov
With essays by Phil Patton and Bruce Sterling
Hardcover, 248 pages
Published July 14, 2005 by Chronicle Books

Published in conjunction with a major exhibition at the San Jose Museum of Art, Blobjects and Beyond is the first comprehensive survey of the new fluidity in contemporary design. Wikipedia reports that that the origin of the term “blobjects” is in dispute but that Phil in a 1993 Esquire article attributed it to the now-late designer-author Steve Holt, who defined it as a design object with smooth, flowing curves, bright colors, and an absence of sharp edges.

From the Phil Patton essay, “Cutensils” :
Cuttensils, a contraction of “cute utensils,” are blobjects that operate on the border of juvenescent form. They are small, clever, friendly, cheerful, useful objects designed to bring delight to the most mundane of human tasks–beating eggs, stapling papers, and flossing teeth. They are cartoon plants, animals, aliens, and humans. Although they may have lost all pretense of seriousness, they’ve kept the essence of functionality. Cutensils are tools that look like toys, but their true magic rests in their ability to transform ordinary experiences into pleasant rituals.

From the Phil Patton essay, “Bio/Exo/Derma”
When Philippe Starck’s WW stool appeared on the scene in 1990, it seemed to have arrived from another planet. Conceived as one element in a group of office furniture commissioned by German film director Win Wenders (hence the title WW), it was clearly not designed for the reclining or seated posture of any human being. A purely conceptual study, it appeared more suited to an alien who might have found repose on the stool’s attenuated shape. A strange blue-green hue added to its otherworldliness. Other interpretations came to mind as well. The WW could have been a neuron screaming in pain. Or one of the bonelike shapes that populated the deep-perspective paintings of Surreal artist Yves Tanguy. Or it could have been a sinister rhizome sprouting from the earth. However it was interpreted, it was clear that the WW came from strange soil–the imagination–where seed-like shapes sprout into full-gown flora and fauna.

This limited edition (200 copies) book of die-cut cardboard provides brief histories of mid-century architectural and design icons – Renzo Piano, Gio Ponti, Le Corbusier and more – written by Phil Patton and matched to images of their work, overlaid with swatches of color in their palettes. The book was designed by architect and designer Emanuela Frattini Magnusson. 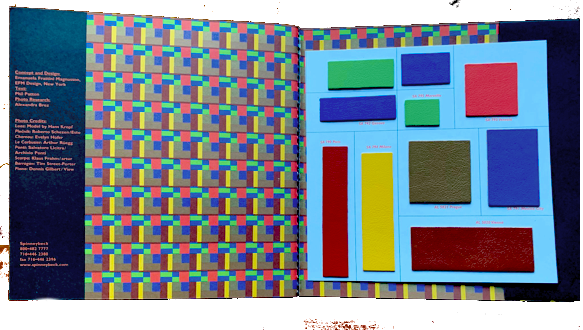 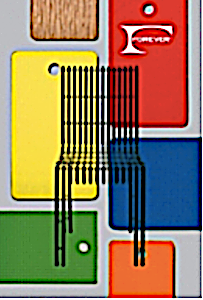 From the Publisher. Formica® is 100 years old! To celebrate this centennial, Formica Corporation has published Formica Forever. The book takes us on a lively, information-packed walk through the life of this much-loved material: from its humble beginnings as electrical insulation; to its initial adoption by designers including Donald Deskey in the 1930s; to a golden age ushered in by the post–World War II housing boom; through global expansion in the second half of the twentieth century; to the laminate’s inventive uses by designers, artists and architects such as Jasper Morrison, Daniel Buren, Frank Gehry, Laurinda Spear and Zaha Hadid; through to the present, which finds the Formica Group working with young designers to push the limits of this pioneering material. The book’s designer, Abbott Miller, has brought together an exuberant array of archival illustrations of original product samples, advertisements and other ephemera. These are anchored by three essays by Phil Patton on the history of Formica Corporation; by Alexandra Lange on Formica Materials and the design world; and by Peter York on the “wipe-clean world” made possible by Formica laminates.

Excerpt from the Phil Patton essay, “Growing Global: A Century of The Formica Brand and Business” Like a character in film or literature, Formica laminate has shown an uncanny knack for being present at historical turning points. From fairly obscure origins in mid-America, the Formica trademark grew to become a global brand –among the top ten recognized trademarks on the planet. It was born in a period of economic turmoil and technological revolution not so very different from our own era.

This catalog coincided with an exhibition at the San Francisco Museum of Modern Art. From Goodreads: Following a general introduction on the culture and consumption of glamour, three essays explore the concept as it has evolved in the fields of fashion, design, and architecture….Phil Patton discusses the industrial designs of Bentley, Jakob + MacFarlane, Marc Newson, Greg Lynn, and more, linking postwar culture’s fixation on consumer goods to the establishment of class identity and the intricacies of branding and marketing.

Excerpt from Phil’s essay, “Industrial Design”
The [“matrix”} grille of the 2004 Bentley Continental GT coupe…is an apt symbol of the state of design at the beginning of the twenty-first century, as many industrial designers have begun revisiting — with a twist — the forms and patterns of the past. In a time of remakes and remixes, covers and sampling, design has become deeply implicated in the reinvention of glamour. Simultaneously, the ideal of impersonal mass production has gradually given way to the paradigm of highly personalized mass customization. 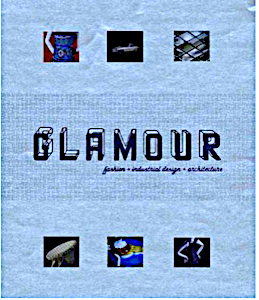 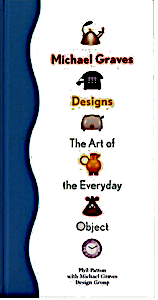 Thia is the inside account of architect Michael Graves’ one-man design revolution. In creating more than one thousand objects for the home over the last three decades, the acclaimed architect elevated everyday objects–from toasters to toilet brushes–into enduring icons that redefined the American home. With the resounding success of his collaboration with Target Stores, Michael Graves became a household name, equivalent in the public eye with the very concept of “good design.” In Michael Graves Designs: The Art of the Everyday Object, author Phil Patton surveys this fascinating career in design and retail, from kitchen accessories for Alessi to hotels and household objects for Disney, crystal bowls for Steuben, boutiques and packaging for Lenox and more.

On the Job: Design and the American Office
Edited by Chrysanthe Broikos and Donald Albrecht
Published November 27, 2000
by Princeton Architectural Press
in conjunction with the exhibit of the same name at the National Building Museum, Washington, D.C.
Paperback, 128 pages

Excerpt from Phil’s essay, “Technology in the Office: Individual Power and Collective Standards”
Our common vision of ourselves, in the office as in the laboratory and factory, is Jeffersonian: We think of ourselves as a country of independent tinkerers, harvesting ideas and technologies, much as Jefferson idealized us as a nation of independent farmers. The America that creates new inventions in barns or garages, then turns them into huge industries, is a vision alive and well in twenty-first century Silicon Valley.

But “growing technologies” has been only part of the tale. The reality is as much Hamiltonian as Jeffersonian. The birth of invention and industry and the evolution of office technology shows an important role for government investment and infrastructure, for the power of shared standards over individual innovations. Technology’s impact on the office, as on other spheres of life, has always been tempered by social and cultural factors, some resisting, some furthering innovation, and always torn between individual power and collective connection. 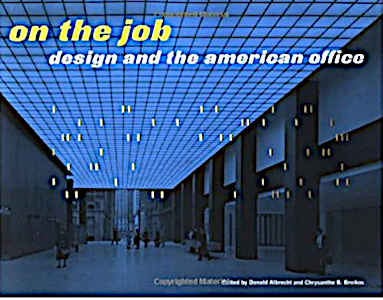 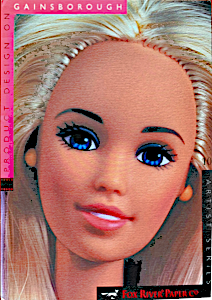 Excerpt from “Phil Patton on Neutrals”
Now and then a product comes along that offers a simple solution to a problem characteristic of its era — a blinding glimpse of the obvious, it does its job so well, for a small cost, that it becomes an icon. The Post-it is a great example. And the Cable Turtle has that potential.

To Design OR Not to Design: 35 Insightful Articles from 21 Senior Designers
Published by AIGA, 2010

AIGA China’s first book in the series, AIGA Speaks, aims to foster innovation, explore the intersections of design and business, and enhance design education. Phil’s contributions to the chapter, “Design in the Public Realm,” were the essays, “Air Force One: The Graphic History” and “Stand Back for the Exploded View.” In the chapter, “The Evolution of Design,” Phil wrote the essay, “Gone in Sixty Seconds.” 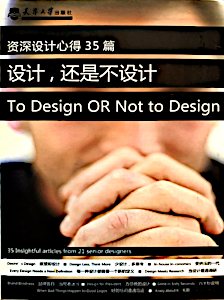 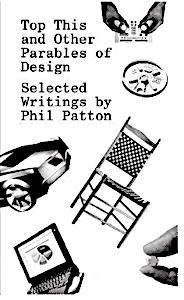 Forty excerpts of Phil’s writings, chosen by his friends in the design world.

From the Cooper Hewitt:
In September 2015, the world lost Phil Patton—prolific design writer, teacher, and tantalizing wordsmith. Patton’s insatiable curiosity, sense of humor, and keen eye made for the most compelling reads. Whether it was chronicling design minutia, quirky anecdotes, or bizarre tales, Phil’s hundreds of books, columns, articles, and posts always delivered a new account. As his editor at i-D magazine, Chee Pearlman said, “His insight takes the reader beyond the object to an understanding of its broadest sociological context.” No topic eluded him, and for a large part of his 40-year career he championed automobiles, technology, and product design. Roger Black, designer, writer, and longtime colleague and friend of Patton’s wrote, “He taught The New York Times—by example—to cover design. The domino effect, the rest of the media followed.”

This volume compiles 40 selections representing the wild range of interests and fascinations that occupied his thoughts. Punctuated by images of ideas and lists from notebooks he carried everywhere, Top This and Other Parables of Design is an intimate and portable companion for those who choose to always have a witty, informed friend around.

Up, Down, Across: Elevators, Escalators, and Moving Sidewalks
Edited by Alisa Goetz
Hardcover
Merrell Publishers, September 1, 2003
Exhibition catalog for the National Building Museum exhibit of the same name

The impact of cars, trains, and planes on our landscape, buildings, and culture has been well documented, but an account of the history of elevators, escalators, and moving sidewalks has previously been far from complete. Filling this gap, this landmark publication documents the extraordinary impact of these methods of human conveyance on the urban and suburban landscape, building types, and culture worldwide.

Excerpt from Phil’s essay, “Hovering Vision”
The most famous glass elevator in fiction made its appearance in 1964 when Roald Dahl published Charlie and the Chocolate Factory. The most famous glass elevator in reality took shape in blueprints at almost the same moment, as architect John Portman began planning the Hyatt Regency Hotel in Atlanta, Georgia, which opened to the public in June 1967. Its twenty-two-story atrium and glass elevators made the hotel an immediate and immense hit with the public.

Like Willy Wonda’s elevator, held up by the mythical skyhook, John Portman’s version was suspended in the popular imagination and fantasy by a long tradition of collective dreams of hovering, floating, and rising — and a long popular-culture tradition in fiction, pulp magazines, and at world’s fairs. 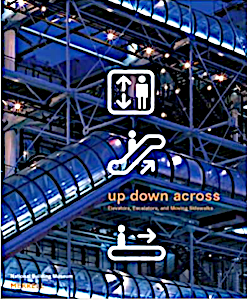