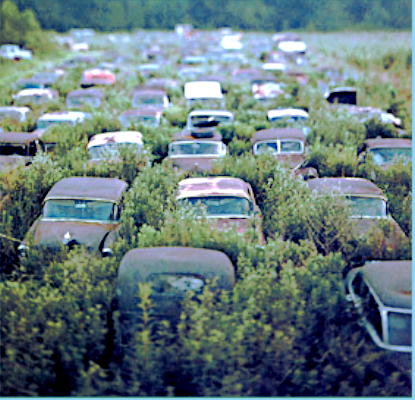 If it was made before 1973, chances are you’ll find it here, rusting in peace. Simpson’s Auto Parts, outside of Memphis, is not only America’s finest auto graveyard, it is a true recording of our century.

I am standing knee-deep in blackberry brambles and kudzu when Bill Simpson threatens me. “I could leave you here,” he says with a thin smile, “and by morning the possums and bobcats would have picked your bones clean.”

Simpson’s Auto Parts, about fifteen miles east of Memphis on Highway 70, may look like nothing more than a jungle from where I stand, but, in fact, it is a junkyard. An epic junkyard. The largest and most thickly populated junkyard in the junkyard capital of the world. Rumors of Simpson’s had reached me from awestruck friends who had come across it on visits to the area. I’d been to plenty of fine-car collections and car museums in Europe, but this was a place I had to see.

The arrangement of cars at Simpson’s is as random as the paths of memory. Falcons rooost by Firebirds, Chevelles by Hudsons, Tempests by Bel Airs.

…”Salvage yards” like Simpson’s are the ultimate end of the assembly line, the final link in the great chain of automotive being. They provide an archaeological record, a scattered history in rusted hulks and fading paint, of the American love affair–not to say obsession–with the automobile. There are five thousand cars here in all, spread over fifty weed-choked and copperhead-infested acres. A guy like Simpson will sell you a door or a fender or a whole car. He’ll even deliver. “I’ve got a Model A and Crosleys,” he says. “Hudsons and Kaisers. LaSalle. Packard. Nash Metropolitans and Rocket 88’s.”

…Wandering through the lot, clambering over fenders, squeezing between bumpers, I encounter an arrangement of cars as random as the paths of memory, a free-associative juxtaposition of make and model, year and type. Falcons roost by Firebirds, Tempests by Plymouths, Chevelles by Hudsons. Doors and hoods dangle beneath the cheap-floozy-pink fluff of the mimosa tree, the tangle of honeysuckle and poison ivy. Dragonflies flick among orange tiger lilies.

…”Is that one that Elvis bought?” I ask, it being common knowledge around here that the King bought about three hundred of those Caddies. He got a big kick out of sidling up to some ordinary citizen with his nose pressed against the glass at the dealership, asking him which one he wanted most, and buying it for him on the spot.

“It could be,” Bill says. “I know we got one of them damned ol’ things Elvis drove in some movie. The one with the door flapping open in front. Two wheels in front, one in back. Whatever the hell was that?”

“Yeah, that. Over here.” It looks like a Renault on its side. Or a cracked egg.

Deeper into the green, we come upon the butt end of a Ford Falcon, the compact car Robert McNamara dreamed up one day in church, the story goes, scribbling the specs on the back of the hymn list a few years before he went off to head up the Pentagon for JFK. Behind it sits a ’49 Mercury, the customizer’s darling, chopped and channeled, lowered and lengthened in a thousand ways.

Read the full story behind a paywall at https://classic.esquire.com/article/1998/10/01/junk